We are sitting in the bowels of Stepping Hill hospital in the Healthy Young Minds section (formerly known as CAMHS). Same thing, different name. A few weeks ago,Eric claimed over social media that he was ‘battling with anxiety, depression & suicidal thoughts’. We had to hear this second hand, which is sad in itself.

We have seen no signs of any of this. He had been away with his Aunty and ourselves and had a great time. He ate well, slept well and seemed happy, or as happy as he can be.

To be on the safe side I made an emergency appointment at the Doctors and he was referred to HYMS. I have been ill for 2weeks, barely able to leave my bed , but dragged myself here for him only for the mental health nurse to give him the option of not speaking in front of us. This was the option he took. Apparently, because he is 16, someone has deemed this to be the threshold of adulthood and maturity. Only in the recent travesty of having to try and retain his Disability Allowance, that has changed into Personal Independence Allowance, have we been told that our son is now able to make decisions for himself. I thought 18 was adulthood, but apparently if you have additional needs and an emotional age several years younger than your chronological age, then it is deemed by the State that you are indeed best placed to make your own decisions. I have yet to meet any 16 year olds who possess this wisdom and I have been counselling teens for 5 years.

So here we sit in the awful reception area, waiting for him to stop pouring out all his learnt angst to some possibly gullible nurse who will believe all that is said. When we are eventually allowed in the room and it is a bit like having half a conversation as we do not know what he has said prior to our arrival. We are having to give an opinion without being in full possession of the facts.

The upshot is that the mental health nurse has offered some CBT (Cognitive Behavioural Therapy) type intervention on a bi-weekly basis for a limited time. Eric had not shared with her that we had enlisted the help from Sue Hawkins ( Educational Psychologist) already. Sue has proposed an action plan that helps with his anxiety cycle and will do some deeper Lifespan Integration therapy also around a sense of self and the fact that he is good enough already.

We leave, no further forward. The mental health nurse does not deal with ADHD so a letter must be written to the ADHD specialist . The irony being that the ADHD lady was in the office next door and the conversation could have been had there and then. But wait we shall.

Eric had decided to work with Sue Hawkins and I am relieved because I never know which way he will swing, but I had to ring HYM’s as he refused, after promising that he would make the call himself. We are now waiting on the Post Adoption Social Worker to get back to us. Eric is entitled to Post Adoption Fund support on an annual basis. The first phone call 2weeks ago has not been answered and we have called again. Still waiting…

One of the many frustrations is that now Eric is 16, apparently he can function an adult. He can manage his own money, see professionals without parental input. I have yet to meet many (if any) 16 year olds who can cope on this level, let alone with all of his additional needs adding further layers of complexity. Who decided 16 was now the age of adulthood but only if you have special needs. 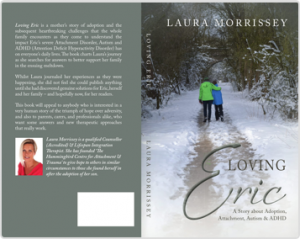