Eating disorders can be a life threatening condition. I read these statistics and wondered if I should include them or not…but they are facts and sometimes we need to know the reality of the conditions that people suffer from, it certainly hit home with me. Look away or skip this part..

According to Anorexia & Bulimia Care (1) these are the realties of eating disorders:
1. 1.6 million people have a diagnosed eating disorder
2. Young people between the ages of 14 and 25 are most at risk
3. The average age of onset of Anorexia Nervosa is 16 – 17 yet the number of cases of children affected and cases of early onset continues to rise. The average age of onset of Bulimia Nervosa is 18 or 19 years.
4. Department of Health estimates 4 million people currently struggle
5. Anorexia is the leading cause of mental health related deaths
6. High mortality rate due to organ failure and suicide
7. Of those surviving, 50% recover, whereas 30% improve and 20% remain chronically ill.

Eating disorders are complex, know now boundaries of sex, race, background and are affected by many different things and
‘..research shows that eating disorders have a genetic predisposition and are triggered by the interplay of biological, social and emotional factors, such as stress, bereavement, family break-up, physical illness, bullying or even abuse.’ (1)
Individuals who are effected are often undergoing life struggles, so if we think of teenagers who are most at risk, they are under stress from exams, the fear of growing up & what the future holds, having little or no control, family breakdowns…all or any of these stressors may lead the person to believe that controlling how much they eat or weigh will help them to feel more in control and happier. It can be the only thing that they feel that they have any control over…success via the scales…it starts with low self esteem and can become hatred of themselves and their bodies.

No amount of compliments or comments to the contrary can shift the mindset and once it is embedded it is extremely hard, though definitely not impossible, to shift. Anorexia sees the individual restricting their diet, becoming increasingly controlling about what they will eat and the amount. ‘Success’ from losing pounds becomes compulsive, thin is never thin enough. They will avoid eating saying they have already eaten, hide food and become withdrawn and remote. 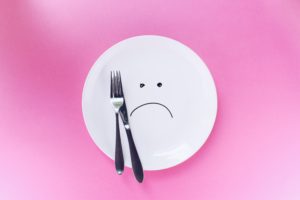 Photo by Thought Catalog on Unsplash

Physiologically, they feel the cold acutely, grown down on their skin, look pale, periods in women stop and bone density gets compromised. The body breaks down. Regardless the sufferer will still themselves as fat and feel self hatred every time they look in a mirror.

In Bulimia the person will avoid eating occasions but will binge eat at times, dissociating and then ‘coming to’ out of an almost fugue state to realise what they have eaten, often all those things that they normally avoid..ice cream, chocolate, cake. They then purge, make themselves sick and use laxatives to maintain their weight, which often stays constant. The effect on the body of the binge/purge is really harmful to the heart, the digestive system & the body as a whole.
If people do not fit into a category per se, then they can be diagnosed with OSFED ( Other Specified Feeding & Eating Disorder), but the impact is still massive for the sufferer. Dr Steven Bratman in 1997 identified ‘Orthorexia’ (2) which is not formally accepted but makes sense if you know of anyone (or yourself) who has developed an unhealthy obsession with only eating pure foods. These choices of what is pure is up to the person and means that they restrict of exclude other food groups not on their list. With the rise of ‘healthy’ diets, I am sure that this type of restriction is becoming more commonplace.
The above categories all affect the person adversely health wise, mood, ability to work and hold down relationships. Early intervention is key because it is far harder to treat when the behaviours are ingrained. Certainly when the weight plummets and hospitalisation occurs, the individual is made to eat and is weighed regularly, as preservation of life is the top priority but this focus on what you eat, the scales all compound the condition potentially. Best to avoid this extreme intervention.

I work in a way that seeks the trigger. What was happening at the time when the eating disorder took hold? Was there trauma? Lack of control? The eating disorder can be seen as a ‘part’ that was developed as a protector so can that part be asked to relinquish control now, allowing the adult version of themselves to take back control? I am not an expert in eating disorders but as a therapist you cannot work in this field and not come across it. I work in connecting the client with their inner core…
There is hope. There is help. Family members living with people with an eating disorder need support also, as it devastating to see someone you love suffer this way. Early intervention is key!

Enter your email to receive your newsletter and access free resources!